Norton’s of Green Lake – Featured in Many Local Newspapers

The task was mainly to keep the place clean. He remembers the school bus picking him up at the restaurant and taking him to Green Lake High School, from which he graduated in 1971. That was nearly a half-century ago. But now, life has come full circle for George.

He and his wife, Robyn, just became the newest owners of the historic eatery along the water of Big Green. “Life has come full circle for me, as far as I’m concerned” George said. “I ‘m kind of home, where it all started. Even more interesting, this isn’t the first time George has owned Norton’s. He and his brother, Peter, actually purchased it from their parents in 1985, and operated it for about 20 years before selling it to Mike and Jill Havey in 2005. At that time, George wanted more family time.

George and Robyn Mockus – New Owners of Norton’s”I wasn’t seeing my family enough,” he said. “It was time for a change. With the demanding hours here, I didn’t see [my daughters] much, and I wanted to catch the home stretch of their youth,” he said. One month ago. The Havey’s sold it to George. It was an easy decision to take it, George said. “It just felt right,” he said. “It was almost like we were waiting for that call, and it came. Robyn added. “And our kids are in college now, so it’s kind of like our baby.”

They’re pleased the Havey’s kept intact the physical structure of the historic building, along with the quality of food. “That part of the equation was very appealing,” Robyn said. The absence feel more like a vacation than seven years under a different owner. “I’ve been here two weeks, and it feels like I never left.” George said. “Guess I took a seven-year-vacation. [I’ve seen] a lot of familiar faces coming in already. Well-wishers. It feels good. It’s almost like a family when you own a restaurant.”

Several employees remain in place from when George initially sold Norton’s to the Havey family back in 2005. One has worked there 41 years, and two more have more than 20 years of experience at the establishment. “Which makes my life easier.” George said.

Although George and Robyn fully intend on keeping Norton’s tradition alive, there are some new things they’d like to bring. “We have some ideas for a fresh menu, noon and evening.” George said. “We have some ideas for minor remodeling.” Perhaps it will continue as a family business for many more years to come. “Maybe our daughters will take an interest in the next generation – you never know.” George said. “They’re welcome to it.”

Norton’s of Green Lake Back in Familiar Hands 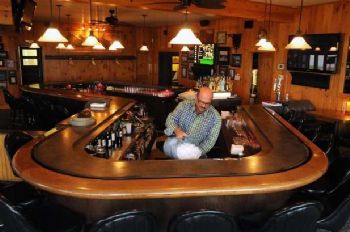 GREEN LAKE – There are some things you could always rely on finding at Norton’s of Green Lake: The cloverleaf rolls, the “Touton” open-faced sandwiches, spectacular lake views and a member of the Mockus family on the premises.

After eight years away, that last one is true again. George Mockus Jr. and his wife, Robyn, repurchased the supper club last fall, seven years after they ended 40 years of family involvement in the business.

“What amazes me is that after 30 years and a one-way ticket to California, here we are back in Green Lake giving Norton’s another shot,” George Mockus said. “It’s fun to get another chance here. It just seemed like the right time and the response has been phenomenal.”

Bud and Harry Norton put their name on the supper club they opened in 1948 and ran until Harry died in 1966.

But it has been the Mockus family that has managed and overseen Norton’s growth and prosperity for the most of the last 45 years. The family’s tenure began when the company that took over following Harry Norton’s death hired George Mockus Sr. to manage the property.

When he went to the University of Wisconsin-Oshkosh for college, he’d return on weekends to help out. And when his father was ready to retire, it was George and his brother, Peter, who bought it in 1985.

George and Peter sold the business to Jill and Mike Havey in 2005 and moved on to other pursuits, including George and Robyn’s move to California.

But last fall, the Havey’s called George and asked if he’d be interested in buying Norton’s back. He and Robyn agreed, anxious for the chance to upgrade the establishment.

Photos of longtime customers and staff, old menus and amusing letters the family received over the years now cover the main wall of the bar area, and a woodcut map of Green Lake greets visitors when they walk in the door.

“Structurally, everything was sound. A little refreshing is all it really took,” Robyn Mockus said. “We didn’t really change much, just added more history and more community.” The business remains a family affair, too.
On any given day, George’s sister, Mary, and his mother, Lucille, can be found helping out in the kitchen.

Mockus said he hopes to expand catering and events business as things settle back into place this spring and summer.

“We want to be accommodating,” Mockus said. “Anything you want, we’re going to try and say “Yes, we can.”